In 1998, Ed Bryant and Doug Anderson began designing and building numerous luges under the Bodrodz Land Luge Workz name and eventually the two would build some of the worlds fastest gravity cars.

Ed Bryant, then 37, was a well known street luger from the Southeast.  Bryant began riding luge in the Ohio area in the mid 1990's before moving to Atlanta.  Ed, a long time muscle car and motorcycle enthusiast, also had a reputation for his exceptional skateboard  skills.  After moving to Atlanta, Bryant would ride the mountain roads of North Georgia mainly by himself.  Often hitchhiking a ride back to the top after a run.  Ed would also ride with Mike Shannon, National Street Luge Association promoter, in the mountains of Tennessee and North Carolina. Bryant would also travel to Southern California to the epicenter of street luge and run some epic roads such as Templin Hwy.

the "Fast Eddie" and the Bodrodz Missile Story

This is the last picture of the Bodrodz Streamliner Missile. Ed "Fast Eddie" Bryant was the pilot of this sled. Anderson and Bryant began construction of this sled in early 2000. The sled was finished in early 2001, but for what ever reason no pics were taken of it completed. I believe the sled weighed in at around 70 lb.s and was 12 ft. long. After testing, decided they'd take a shot at the century mark. Bryant, no stranger to speed, having piloted another luge with basic aero work to a speed that topped out at 94.9 MPH, he and Anderson agreed that 100 MPH was within their reach with a good aero sled..

In March 2001, Bryant, Anderson, and Holsenback arrived at the hill with the Bodrodz Missile. Running on an open road, the plan was to make a series of runs, working our way up the hill with increasing speed increments to make sure the sled had no bad habits at the upper speed range. Scott Holsenback would chase on a standard boomed luge.

With the trucks cinched down, the first run from a third of the way up produced a low 80's run. Holsenback commented that after what seemed like around 70, the Missile would get up and walk away. The draft being minimal at best. which made it impossible for the Missile to drag Holsenback along any further with it. Second run from half way yielded 87 mph.

With plenty of hill left, thoughts this might be a historic day began to surface. Third run from about 1/8 mile up the road netted 93 MPH! Now solid in the 90's Bryant wanted one more run before going from the top. Ed commented he really had to concentrate keeping the Missile on course at those speeds.

From a 1/4 mile from the top, Ed was looking for a high 90's run to make sure the sled would not throw a curve ball at that high speed. 100 MPH was now within Bryant's grasp. Ed rolled off with Holsenback in chase and Anderson driving chase vehicle. Now hauling ass and Scott falling behind, Fast Eddie, well into the mid 90's, elects to abort the run and all hell breaks loose!

Now at full speed, Bryant sits up trying to airbrake some speed off the Missile now hurtling toward the chicane with a guardrail, the low pressure area created by him sitting up made a ton of turbulence which caused the Missile to start a slow death fishtail. Lying back down he regains control and the speed again now begins increasing. Not wanting to enter the chicane at these speeds and the seriousness of the situation escalating quickly, Ed begins removing his legs out of the bodywork to get the shoes to the pavement, only to have the air load on one leg blow the Missile completely sideways and pukes Ed out on the road and both now headed for the ditch. Still at warp speed.

Anderson in the chase vehicle tops a small crest only to see pieces of the Missile raining down thru the trees after ramping up the ditch embankment and Bryant tumbling to a stop motionless down range. Holsenback who was running mid 80's overshoots the crash site is now running back up the hill to assist Bryant. Thoughts are now of this day just took a very serious turn for the worst.

Bryant, coming to after a brief loss of consciousness, advises Holsenback and Anderson not to touch him while he's doing inventory on what's broken. Believing his ankle is broken, wants to know the speed on the GPS. With the GPS missing from his left breast pocket, Anderson finds it. Somehow it ended up jammed in his leathers down at his right ankle. The pressure from it made him think his ankle was broken. Nothing broken.

The day ended with a blistering speed of 95.3 MPH, a completely totaled Bodrodz Missile, and Bryant beat up a bit with no broken bones. He was lucky. Falling short of our mark, Fast Eddie Bryant lived up to his name and proved he is without a doubt, one of the fastest men in gravity sports.
This was a 50+ mph crash at EDI's 2001Last Chance Gravity Games qualifier in St George UT.  Jono Moore and Bodrodz riders Ed Bryant and Scott Holsenback burned in out of left hander at the bottom.  No major injuries with everybody walking away.  The same three would crash the following year, in the same corner. Jono Moore would be seriously injured. 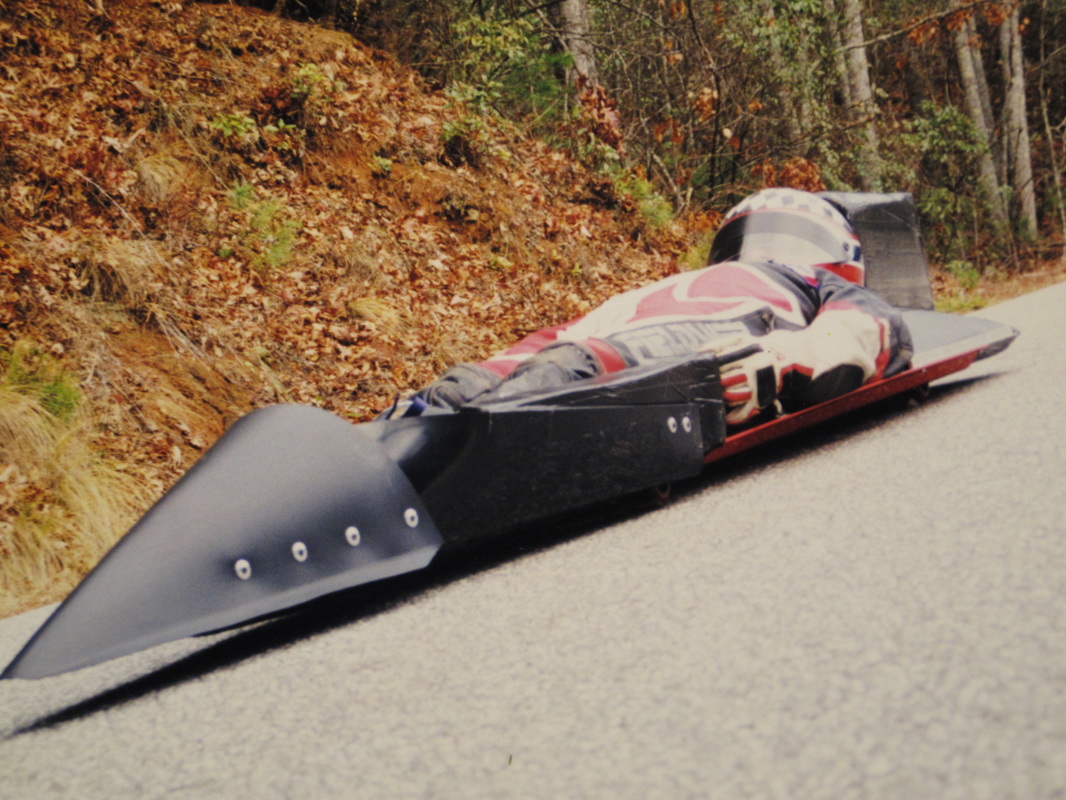